Where does your enterprise stand on the AI adoption curve? Take our AI survey to find out.

Mobile gaming downloads were flat in the first quarter ended March 31 compared to a year ago, while mobile game revenues averaged about $1.7 billion a week, up 13% from $1.5 billion a week in the same quarter a year ago, according to a report by mobile data and analytics firm App Annie.

That means that it was harder for mobile game companies to beat last year’s numbers because of a one-time pandemic boom. But the numbers are encouraging because they show that gaming held onto its gains even as other forms of entertainment started coming back in the second quarter as pandemic conditions eased. (App Annie said its numbers could change as it finalizes end-of-month data).

In the first quarter ended March 31 this year, the growth rate for games was a lot stronger. The Q1 report said consumers spent $1.7 billion per week on mobile games, up 40% from pre-pandemic levels, while mobile game downloads grew 30%.

App Annie didn’t explain the slowdown in the second quarter for games, but it does coincide with Apple’s prioritization of privacy over targeted advertising with the April launch of iOS 14.5. That version asks users if they will grant permission for advertisers to use their data from the Identifier of Advertisers (IDFA) for advertising purposes. Most users are not expected to grant that permission, and that could hurt the ability of the game industry to target ads at gamers.

Above: App Annie shows gaming is still up 35% in spending from two years ago, and 13% from a year ago.

In terms of downloads, there were three outstanding titles. Supersonic’s Bridge Race topped the chart, while Hair Challenge was at No. 2. The latter is another female-oriented game very similar to the title in fifth place, High Heels. It’s also worth mentioning Good Job’s Paper Fold, which leaped 12,385 places to No. 8.

There is always less movement in the games spend chart, where the hit titles have much longer lives and more devoted players. The Q2 2021 chart was headed again by Roblox, but the outstanding performer was Uma Musume Pretty Derby at No. 2. This is a Japanese game based on a TV series. It rose 24 places in the quarter.

Manga also inspired two of the quarter’s breakout games: Ni no Kuni: Cross Worlds and One Piece Fighting Path. Japan is a powerhouse gaming market, and the mobile market overall — and is a vital market to consider in a robust mobile strategy, App Annie said. 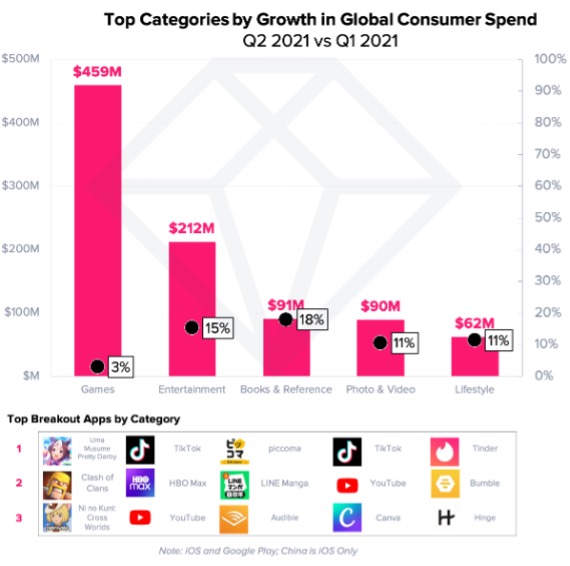 Above: Games are still driving overall growth in mobile.

By platform, the App Annie numbers reveal that spend on the Apple App Store in Q1 2021 grew 30% year over year to $22 billion, while spend on Google Play leaped 20% to around $12 billion.

App Annie said that the numbers prove again the enduring health of the app economy. Thirteen years ago, Apple launched its App Store in
2008 with just 500 titles. There are now 5.5 million across iOS and Android.

“Observers keep waiting for the quarterly revenue numbers to decline. They never do,” App Annie said. “Despite predictions of app  fatigue, the market is still booming.”

The data also suggests that the widespread bump in-app spending prompted by the global pandemic remains in place despite the easing of lockdowns. Stay at home orders certainly pushed consumers towards mobile-based entertainment and productivity across 2020. Yet, as of mid-2021, there is no sign of this habit declining.

App spending on the rise

Globally, the app industry is entering a more mature mobile market. Downloads remain elevated, but the real growth is seen in usage and consumer spend, App Annie said. The data shows that Google Play downloads remained stable year over year at 25 billion, while iOS downloads contributed 8 billion for the quarter.

It’s natural for downloads in mature mobile markets to begin stabilizing as many consumers already have apps downloaded on their phones. They don’t stop downloading apps, but the growth slows as the real focus is on usage. Growth in consumer spend indicates that consumers have become more comfortable spending money on subscriptions and in-app purchases. 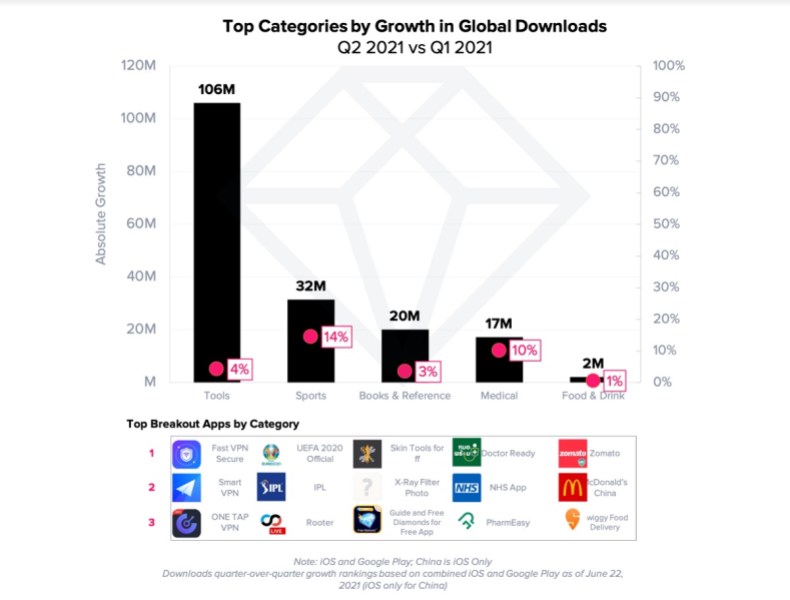 Above: Overall apps are rebounding with the economy.

The top apps in Q2 2021 comprised the expected mix of social, messaging, and video streaming products. TikTok sustained its remarkable dominance in the app space. It is number one in terms of both downloads and consumer spend.

The Wall Street Journal reported that ByteDance (owner of TikTok) had reported revenue for 2020 at $34.3 billion. That’s 111% higher than the figure for 2019.

In Q2, HBO Max hit No. 6 on the top charts, up six spots from the prior quarter. Since the success of Netflix, major content producers have rushed to launch their own subscription-based streaming products. HBO/Warner entered the market with HBO Max in May 2020, a relaunch of the original HBO Now app.

The company ended March 2021 with 44.2 million domestic subscribers and 63.9 million worldwide subscribers (it does not break out the totals for the existing HBO cable customers and Max subscribers). And the service received a huge boost in May when it aired the Friends Reunion. It was reported that the TV special drove more sign-ups to Max in its opening weekend in the US than any of Warner Bros.’ new movies so far this year.

Another notable presence in the Q2 2021 Top Apps chart (by consumer spend) is Piccoma. The webtoon comic app run by Kakao Japan (the Japanese subsidiary of South Korea’s Kakao) continued its steady rise to become the world’s seventh-biggest app by revenue. Piccoma has changed the way Japanese consumers pay for comics by turning complete books into episodes and offering a freemium business model in which readers can pay rather than wait for the next installment. The company confirmed revenues of 37.6 billion yen ($340 million) in 2020 and claims 4.2 million daily users.

In any quarter there are a number of products that come from nowhere to announce their presence in the app stores. In Q2 2021, the charts reveal the long shadow cast by TikTok. The app itself is at No. 2. However, the Tiki app hit No. 5, and in India, the short video app Roposo was one of the top breakout social apps by downloads. That came in the wake of India’s ban of TikTok over tensions with China. Lots of VPN apps, which protect a user’s privacy, were also in the top ranks.

Some of the overall app numbers show which markets and sectors are recovering from the pandemic.

“As some markets begin opening back up, we’ve seen early indications of industries on the road to recovery,” App Annie said. “We’ve also seen signals on what consumer behaviors are here to stay. We’ve taken a look at the mobile app categories experiencing the biggest growth in Q2 2021 by downloads, consumer spend and time spent — an indication of which apps are in demand, most used and most valued.”

Business apps set new records for time spent as Zoom and Google Meet continue to top the breakout charts. Booking.com was a global breakout app in Q2 2021 for time spent — an indication that consumers are hungry to travel. Cryptocurrency remains popular with Binance
topping the time spent chart. 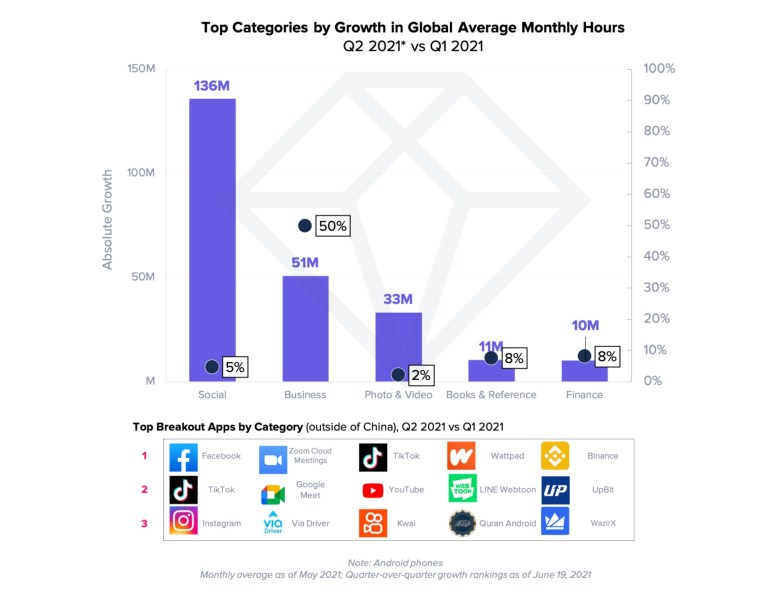 Above: Top categories for mobile growth in Q2.

App Annie said it sees signals that consumers are eager to hit the road and the skies. Monthly hours spent in travel and navigation apps are on an upward trend in markets like the US and the UK, where vaccination rollout has picked up significant traction. The market has recovered from 2020’s low but has still yet to reach pre-pandemic levels in 2019.

South Korea is the most advanced among the three markets, as time spent in travel and navigation apps in Q2 2021 has surpassed pre-pandemic levels, and proved more resilient than other countries with less variance overall.

Despite some markets opening up, other markets like Brazil and India are still actively going through new waves of COVID-19. Usage of travel apps in both countries has rebounded during Q1 and Q2 of 2021 compared to last year — a positive sign for future trends. However, Brazil, France, and India still remain on the road to recovery to pre-pandemic levels in 2019. France had seen a strong uptick over summer in 2020 and App Annie expects to see similar levels return over summer 2021, particularly amidst vaccine rollouts. Engagement in travel and navigation apps can serve as a leading indicator of ‘normalcy’ resuming in a market, but this is closely tied to vaccine rollout and active waves of COVID-19, App Annie said.

The Sports industry is also making a comeback. In Japan and Korea, time spent in April 2021 has rebounded from the fallout in 2020, and surpassed pre-pandemic levels in April 2019 by 20% and 10% respectively. The Olympics could bring in a significant viewer base globally, while the UEFA Champions League and UEFA European Football Championship has helped bolster the European rebound, with time spent in Sports apps in April 2021 up 10%, 10%, 20%, and 55% year over year in Germany, Spain, the United Kingdom, and Italy. In fact, UEFA 2020 Official was the

While the US has bounded back since April 2020, time spent in sports apps remains strong. The U.S. is on the road to recovery and poised to see interest in sports apps resume. The upcoming NFL season will likely drive viewership and engagement in fantasy football apps, App Annie said.

Hybrid and work-from-home models are truly the new norm. Time spent in business apps is still growing as we head into the sixth quarter of working from home. Time spent is up quarter-over-quarter even in markets with strong vaccine rollout like the US (+55% vs Q1 2021) and the United Kingdom (+15% vs Q1 2021). People are spending more time in business apps than ever before — even compared to last year at the height of the pandemic. Even in markets like Australia and the U.S. — where employees are going back into the office — consumers are still using business apps heavily to connect and collaborate while working remotely. Mobile connectivity is more important than ever as employees and businesses embrace a hybrid, or even fully-remote, working model.

“At-home” fitness remains in high demand globally — particularly those apps that focus on getting consumers out and about, such as Strava, Kahoot, AllTrails, and MyFitessPal.

Food and drink apps represent a relatively unique vertical that has seen dramatic growth in time spent since the start of COVID-19 and is showing no signs of slowing in markets like the U.S. and United Kingdom. Ultimately, food delivery, grocery delivery, and restaurant-based apps make people’s lives easier — creating a simple, seamless experience for getting fresh produce or restaurant-quality food. Recipe apps also make the top charts for many markets as consumers choose to get creative in the kitchen, App Annie said.

GamesBeat’s creed when covering the game industry is “where passion meets business.” What does this mean? We want to tell you how the news matters to you — not just as a decision-maker at a game studio, but also as a fan of games. Whether you read our articles, listen to our podcasts, or watch our videos, GamesBeat will help you learn about the industry and enjoy engaging with it.

How will you do that? Membership includes access to: